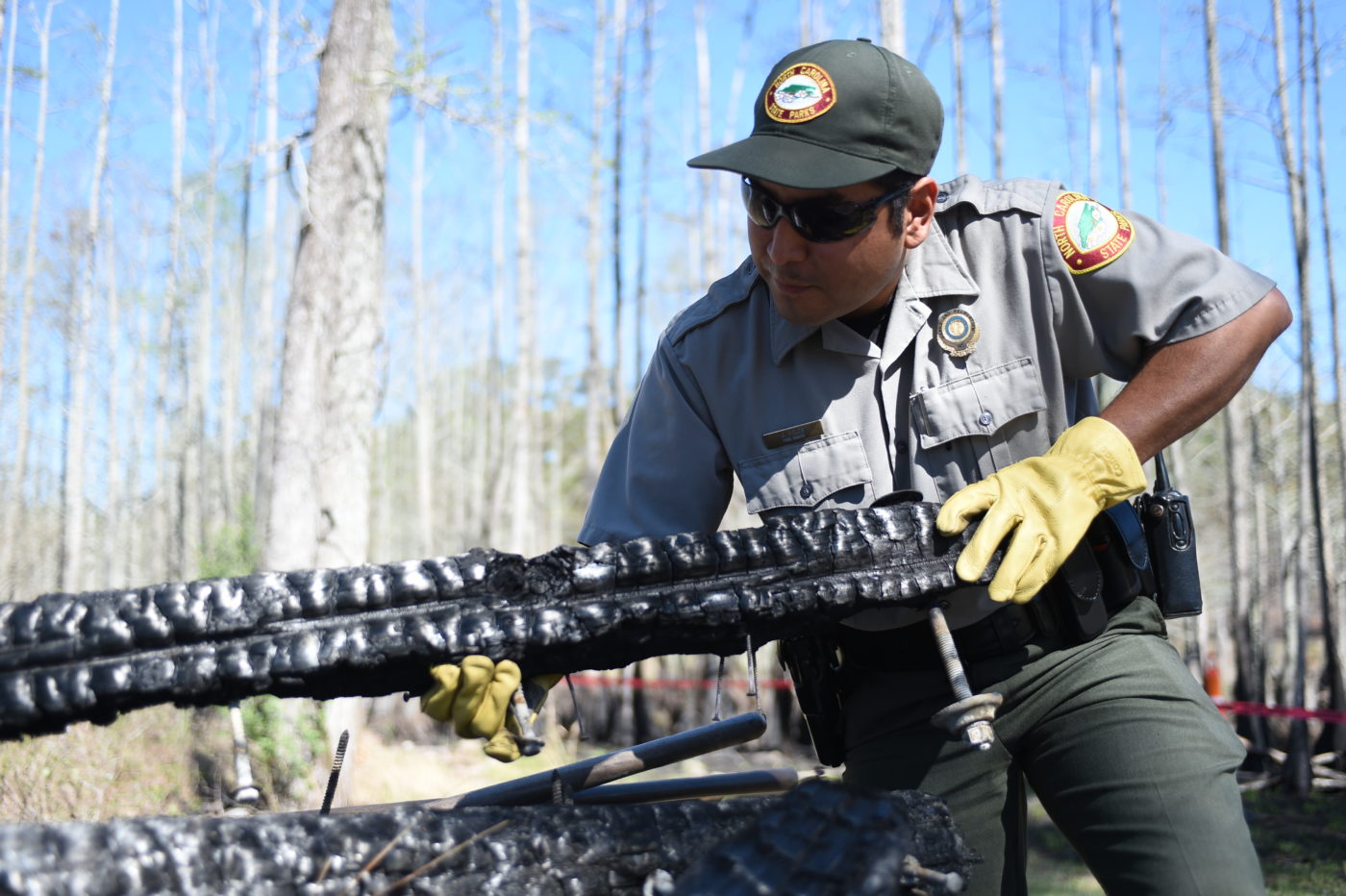 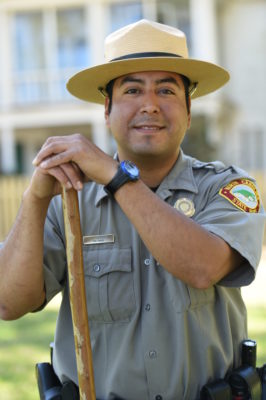 FTCC is celebrating #CommunityCollegeMonth in April by sharing stories from graduates through the years. Jacob Fields is the last story we’re sharing in this weekly series.

The cold tucked itself away for another day. The warm sun had nothing to hide behind on a Wednesday morning in April. The day was ideal for Ranger Jacob Fields who works at Carvers Creek State Park, centered on Long Valley Farm, which was also the historic retreat of a Rockefeller family member, James Stillman Rockefeller. He carried a shaved handmade Crepe Myrtle as he crossed a small stream through the roughly 4 -acre park (4,525 acres). As he walked toward the millpond – damaged and dried out by Hurricane Matthew and a massive flood in 2016 – something on the ground caught his eye.

“It’s sunbathing,” Fields said with a smile. He gently picked up the corn snake. Its brownish body decorated with dark, orange circles of different shapes quickly began to coil around Fields’ wrists and lower arm. It’s thin tongue shot in and out of its mouth. It reminded Fields of a time he and a family walking one of the many trails at the park came across a hognose snake, less docile than a corn snake and an expert at playing “possum.”

“They got to see the snake bluffing – making hissing noises and then playing dead,” he recalled. “When it plays dead, it will roll itself back over if you try to flip it. I’m pretty sure they’ll remember that.”

And it’s those teachable moments Fields looks forward to sharing as, he too, learned himself. His love and enthusiasm for nature didn’t begin overnight. It started simple, as a child, playing outside and muddying himself in puddles. As a teenager, he spent two weeks at Camp Celo, a Quaker-based summer camp for ages 7 -12 in the western part of North Carolina. He learned to milk a cow, went on multiple hikes a day, camped overnight and even swam in nearby rivers. 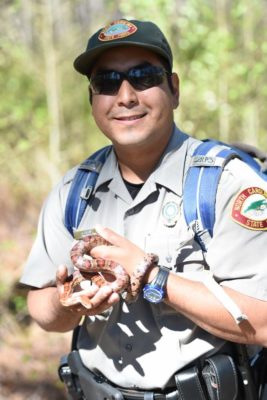 “You learn about how to be outside,” he said. “I just loved being outside, without any walls. There’s always something that I learn when I go outside. For instance, it rained pretty hard [recently] and all of these spotted salamanders were by my house in Carthage, and I had no idea they were there before.”

As a high school student, Fields joined the Junior Curators program under the North Carolina Museum of Natural Sciences. The opportunity allowed him to work with researchers and curators, teaching him how to care for wildlife (even in the museum’s live animal collection) while participating in educational programs and events. The Raleigh native participated in the program every year before he graduated. He proudly calls himself a “nerd” as he still remembers the ABC’s he learned: every letter in the alphabet corresponded with the Latin name of wildlife species such as the letter “A” for C. (Cryptobranchus) alleganiensis, the species name for the hellbender salamander.

Back on the trail at Carvers Creek, Fields let the corn snake uncoil itself from his wrist and arms. It slithered against the bumpy trail back into the shaded shrubbery outlining the trail. He took a sip from his blue hydration pack on his back. He began walking. The North Carolina State University graduate earned a degree in fisheries and wildlife in 2010. Then, Fields worked as an interpretive ranger on the attraction part of Grandfather Mountain before becoming a ranger at the North Carolina Zoo in Asheboro. There, he earned his EMT (emergency medical technician) basic certification. 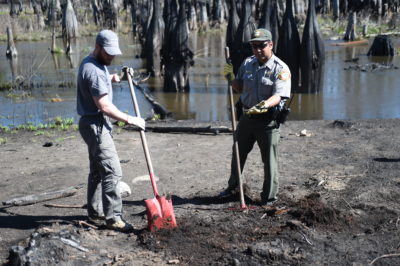 Fields inspects a charred screw from a pier that burned in a fire at Carvers Creek State Park this spring while working alongside a state park employee. Part of Fields’ job includes making the park a family friendly and safe environment for all visitors. [Photo by Brad Losh]

He applied for a position with Carvers Creek in 2015 and six months later, he earned the job. He’s been working at Carvers Creek for the last four years. Part of becoming a park ranger was earning the Basic Law Enforcement Training (BLET) certificate within his first year of employment. He enrolled into Fayetteville Technical Community College’s BLET program that is overseen by Program Coordinator Yovana Vest. Nature came easy to Fields. BLET came with challenges. The physical training and tests and classroom work was intense as the program includes 700 hours of training over 16 weeks. Choosing FTCC to obtain a BLET certificate wasn’t a hard choice for Fields. It was close to his family’s home and two of his colleagues – a park ranger and superintendent – both graduated from FTCC’s program. He mentioned the support from fellow cadets and instructors during his time in BLET.

“That camaraderie helped some of us,” he said. “You have people pushing you and cheering you on. Not one time did I feel like there was an inability for teachers to teach. I’d say if I can do it, you can do it. It takes perseverance and a positive attitude.”

On the front row second from the right, Jacob Fields is sworn in as a law enforcement officer with North Carolina State Parks in May 2016 [photo courtesy of N.C. Division of Parks and Recreation]

“That’s not the case,” he said. “The resources you have available to you, it’s what you start with in the beginning and you move from there. It’s a wealth of knowledge. It’s a great educational, inspiring and even scholarly resource.”

And as a former student, he finds himself becoming the teacher. In 2018, the North Carolina Department of Environmental Quality Secretary Michael Regan recognized Fields for completing the Environmental Education Certification Program. He completed a project to earn the certification, restoring the wiregrass in a visible area to the public near the main Carvers Creek park office. He worked with Boy Scouts, volunteers and staff members on the effort; it improved his teaching techniques where he now includes an outline and list of objectives while addressing the bigger picture of why he teaches. He had a similar experience earlier this month when he received a call from an Appalachian State University student. He was interested in becoming a park ranger after being a part of parks and recreation activity at school. Fields and the student chatted. The student called back to say he applied for a position at Kerr Lake State Recreation Area, which spans 50,000 acres in North Carolina and Virginia, according to the North Carolina State Parks website.

“He said he looked forward to seeing me in training,” Fields said with a brief laugh. “It’s those small things that don’t happen much. I like for people to reach out if they have questions. We are very different from other law enforcement agencies, we’re also educators. We’re very helpful.”

Moments like those remind Fields, even on the long days, why the career he’s in suits him best.