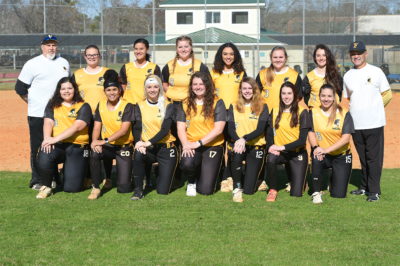 The Fayetteville Tech softball team has added pitching depth to an already strong roster of returners for the 2020 spring season.

Pitcher Ashley Loftin, who made 22 appearances for the Trojans as a freshman, and starting catcher Sierra Mitchell both return, providing a thread of consistency to an expanded arsenal of pitching options for the Trojans.

Available to take the mound are freshmen McKenzie Miller, of Newport, N.C., and Solara Blue, of Red Springs, as well as Miranda McKoy, a Hope Mills native who’s transferred from Methodist University.

The Trojans picked up another key transfer in Chloe’ Radford, a sophomore shortshop from UNC Pembroke who, along with freshman second baseman Abby Jolly of Swansboro, will anchor the middle infield.

Sophomore Cameron Motes returns to the outfield, where she’ll be joined by freshmen Makyiah Mitchell, sister to Sierra, of Morehead City, N.C., and Jessaca Thomas, a recent addition from Fenton, Michigan.

Infielder and designated player Allieyah Awad is also back, giving the Trojans three players from Morehead City on this season’s roster.

The Trojans began the 2020 campaign Sunday, Jan. 26, with a doubleheader at Methodist. FTCC hosts NAIA St. Andrews on Jan. 28 before embarking on a four-day trip to Clearwater, Florida, for the JUCO Kickoff Classic.