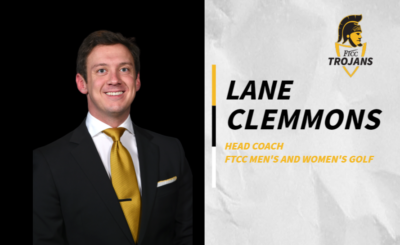 The 34-year-old Fayetteville native will steer the resurgence of a Trojan golf program that’s been dormant since 2018.

The men’s program won the NJCAA Region 10 Championship in 2018, the program’s first year of eligibility and most recent active season.

Clemmons said resurrecting the stalled program is part of the appeal of the position.

This is Clemmons’ first coaching job. He has spent the last two years as the assistant golf pro at Gates Four Country Club.

Clemmons is a 2004 graduate of Terry Sanford High School and earned his bachelor’s degree in economics from University of North Carolina – Chapel Hill in 2008.

Clemmons, who once kicked a 52-yard field goal in a high school game, entered Carolina as a preferred walk-on placekicker for the Tar Heels football program.

“I did everything in Carolina but play in a game — summer school, practice, 5 a.m. workouts in February, which were terrible,” Clemmons said. “It taught me a lot of discipline and a lot about collegiate athletics.”

Fayetteville Tech Director of Intercollegiate Athletics Mike Neal said Clemmons’ experience at Carolina and at Gates Four make him an ideal fit for the Trojans program.

“He has a lot of intangibles that make him right for us,” Neal said. “He’s got collegiate athletic experience at a high level. He works at a local golf course, where he’s worked everyday with local high school golfers. And as a Fayetteville native, he’s well connected to the community.”