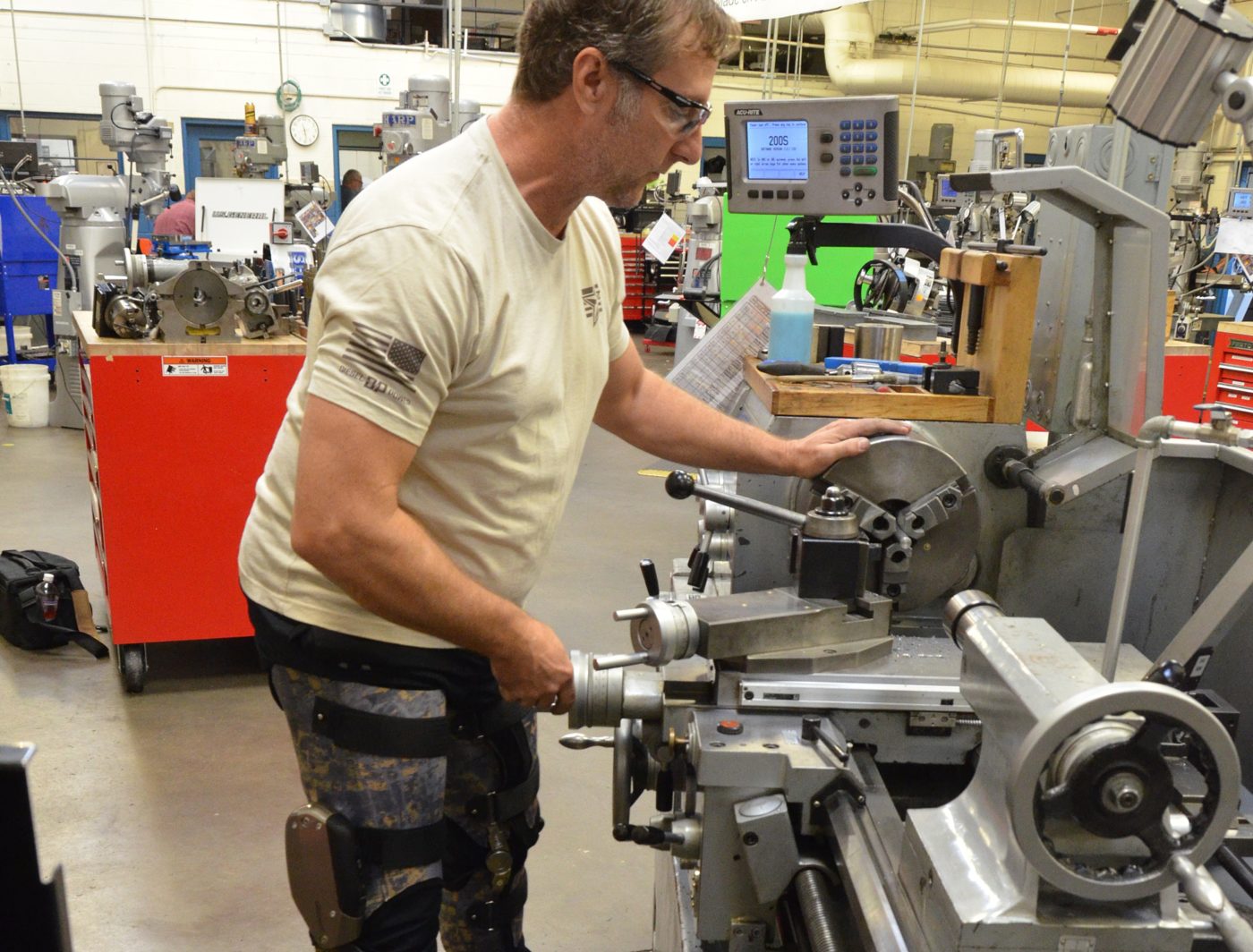 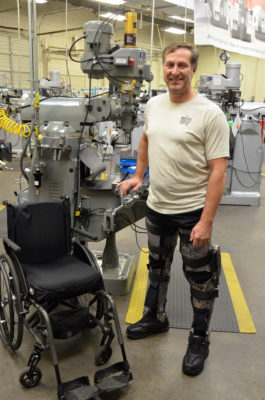 Chris Clark was a pioneer.

Long before he was a student at FTCC, where he’s completed the Welding program and has now started in Machining, Clark was serving with the U.S. Army Golden Knight parachute team.

During his 14-year military career — the last six with the Golden Knights — Clark had made countless jumps and worked with NASA and elite defense forces to test developing parachuting technology.

Those days are in the past now, after a test jump gone wrong left Clark dependent on a wheelchair or crutches for more than four years.

Now, the 48-year-old Salem, Ohio, native is a pioneer of a different kind, as one of a select few people in the world who have a pair of powered leg braces made by Ottobock, a Germany-based company that develops prosthetics and orthotics.

Clark said he’s one of seven people to have this particular model of orthotics, which he received as part of his care from the VA.

A call from Secretary of Veteran Affairs Robert Wilkie drove home just how exceptional the occasion was.

“It’s not everyday you get a call from the director of the VA,” Clark said.

In 2015, Clark, then an Army staff sergeant, was in Milwaukee, Wisconsin, testing wingsuits for use in high-altitude, low-opening parachute jumps.

Clark hadn’t slowed down enough when he deployed his parachute, resulting in the roll bouncing off his ankle before forcing him into a violent spin. He cut away his primary parachute and deployed his reserve, but with only about 200 feet of air left and very little wind to catch the canopy, Clark landed with brutal impact.

The landing obliterated L1 and L2, the top two vertebrae in the lumbar region, and shoved Clark’s right ankle up to the middle of his shin.

Clark lost his bladder and bowels and gained a 10-screw piece of hardware in his ankle, as well as two rods supporting his spine up to the middle of his back.

“They opted not to fuse the bottom (pivot points on the rods), so I can bend over, and I have hip control,” Clark said. “And about once a year, I over-do and have to go get hardware in my ankle replaced.” 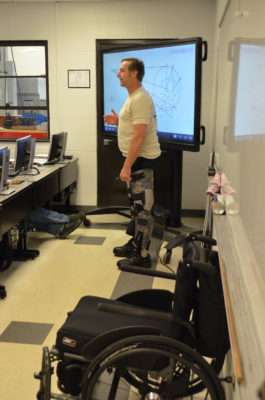 Clark lost most of the strength and mobility in his legs, leaving him dependent on either his wheelchair or a set of forearm crutches.

“It was a huge ego blow,” Clark said. “I went from being Mr. High Flying, Always in the Spotlight, to wondering, ‘What do I do now?’ It took a little while to figure things out.”

Clark, with the help of his wife, Kelly, and the couple’s three children, tackled years of recovery.

In a stroke of what Clark calls “dumb luck,” representatives from Ottobock happened to be at the Fayetteville VA Medical Center when Clark had an appointment. Hearing of Clark’s spinal cord injury, the reps sought him out to see if he would be a good candidate for the braces.

After months of preparation and fittings using demo legs, Clark received his custom orthotics on Nov. 6. He debuted them the next morning to his 20 classmates in the math lab portion of his Computer Integrated Machining class.

Clark arrived in his wheelchair but stood when called to solve a problem on the board by instructor Gary Smith.

The reveal drew a round of applause — and a few tears and hearty handshakes — from the group. 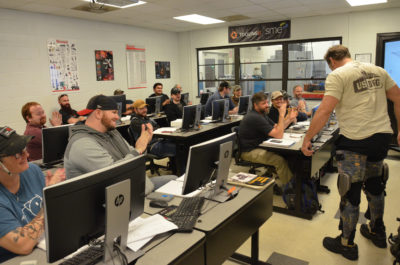 “There aren’t really a whole lot of words that can describe, after being stuck in a wheelchair, the feeling of not having to look up at people,” Clark said. “Not having to use a handicap parking space once yesterday was a pretty cool feeling.”

Clark, who graduated from the Art Institute of Pittsburgh after high school, lived a varied professional life before joining the military, doing special effects makeup in movies and television, molding plastic toys and then becoming a master bricklayer.

After regaining his mobility — and his freedom — Clark is looking to get back into making a living with his hands. He’s opened a business creating flat metal artwork.

“Ultimately, opening a custom car shop is the goal,” Clark said. “It’s all stuff that I used to do that kind of went away.” 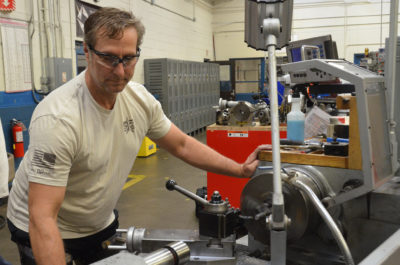