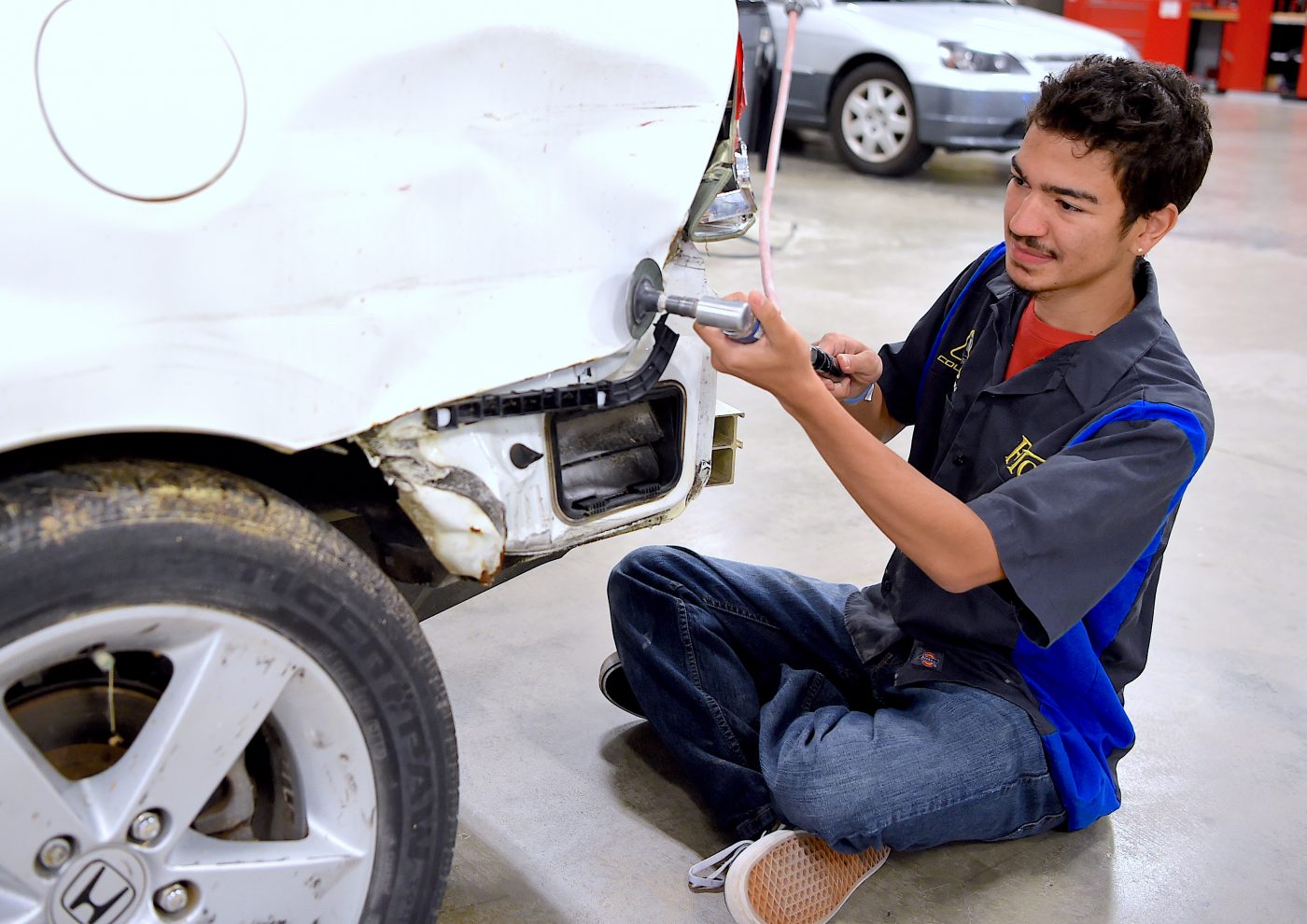 Izaihes “Izzy” Villegas, 18, walked two graduation stages in May. The first as a Fayetteville Technical Community College graduate on May 14 and a week later, for Cumberland Polytechnic High School. The high school is under the Cumberland County Schools system, and is housed on the College’s Fayetteville campus in the Health Technologies Center. Izzy, like some of his classmates, earned their high school diploma and an associate degree at the end of senior year. He accomplished something more.

Izzy is the first full-time student in the College’s Collision Repair & Refinishing Technology Program to earn his high school diploma simultaneously. He also earned four certificates from the same area of study. The program is located in its namesake center in the Military Business Park in Fayetteville. Providing a “first” for one of FTCC’s programs wasn’t on Izzy’s to-do list or earning a college degree as a high school student.

“No, not even during my freshman year,” he said with a soft laugh. “My first two years, I took high school seriously enough to just maintain and pass. I wasn’t the best student I could be. I was doing just enough to get by. I wasn’t really determined to build a future for myself.”

One thing Izzy knew about himself was his interest in cars. He wants to work on and repair foreign cars. From a young age, Izzy would help his father, Johnnie, with repairs at home.

“The first thing my dad taught me was, ‘Whether you go into this field or not, one thing you need to know is how to change a tire and basic car maintenance,” he said. “Growing up and working on cars really led me to want to do this in the future. I knew I didn’t want to be behind a desk so why not turn what I like into a career path?”

Two moments shaped Izzy’s path the summer before he began his junior year: a talk with his mother and a field trip. 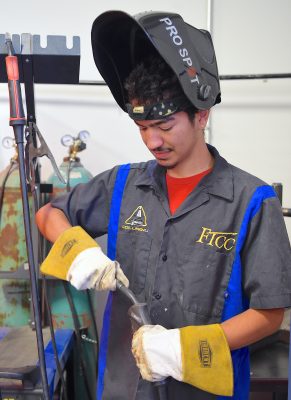 Zuleira Villegas, Izzy’s mom, works as a senior secretary for the College’s Department of Public Safety & Security. Prior, she worked at Cumberland Polytechnic. The high school offers students the opportunity to earn an associate degree, diploma or a certificate in a variety of studies. Villegas admits Izzy attending Polytechnic was her decision. He didn’t want to go. But her insistence had boundaries.

“It’s all about knowing your child, and in some cases as a parent, we have to take a step back and listen to our children,” she said. “What they want versus what we want them to do because I could’ve pushed him toward the medical field or to be a lawyer, to make hundreds of thousands of dollars, but he wouldn’t have been happy.”

The summer before his junior year at Polytechnic, Izzy took “field trips” across FTCC’s campuses to learn more about programs offered. He hoped to find his niche. Jessica Matthews, a cooperative innovative high school liaison for the high school, helped plan the visits. She also serves as an advisor to students while tracking their progress until graduation. She knew Izzy preferred hands-on learning. One of the trips took Izzy and Villegas to the Collision Repair & Refinishing Technology Center. 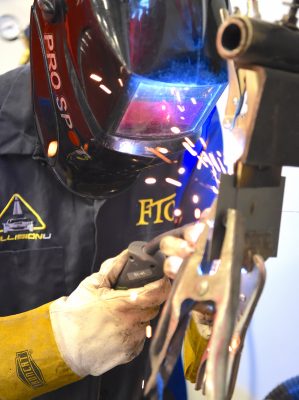 “When he came to Cumberland Poly, he didn’t have a real interest in a traditional education,” Matthews said. “When his mom took him to the collision center, she said it was like a lightbulb going off.”

Villegas said her son has always been vocal and open with her and his father. It allowed the family to support Izzy when he needed it such as when schoolwork kept him up past midnight some days. This time, he needed their support. Villegas remembers what her only and eldest son told her after visiting the center.

“’This is what I want to do,’” she recalled. “Between his father and I, we felt it was a better decision for him to choose. As parents, you’re always worried about everything, but after talking with [Izzy] and us talking between each other, we figured it was the best decision for him.”

Izzy was 16 years old when he started taking Collision Repair & Refinishing Technology classes. He recalled how he described the collision center with three words: this is cool.

“And seeing an actual shop? I said I wouldn’t mind coming here every day seeing machines and gears; they’re basically giant puzzle pieces,” he added. “Coming here for school every day was way better than sitting behind a desk.”

His classmates were sometimes more than double his age – from adults starting a new career to transitioning or retired military servicemembers. Izzy said learning technical skills such as painting, welding and estimating weren’t the true challenges for him.

“I knew if I acted a certain way, I’d be looked at as a child and not a student of the program,” he said. “My biggest fear was being in this environment, surrounded by men, and being looked at as a kid or they say, ‘He’s just a child.’ I knew I needed to grow up mentally, physically and in my work.”

Izzy visited the collision center a few days after graduating from high school on May 20. His former, fellow students – or “coworkers” as he calls them – greeted him with handshakes and waves. They asked how he was, calling him by his nickname. Collision Repair & Refinishing Technology Department Chair Doug Irish said students work in cohorts, meaning they’ll work with the same individuals throughout the program. Irish said Izzy was no different than most students who start the program, coming in with little to no experience in the field. 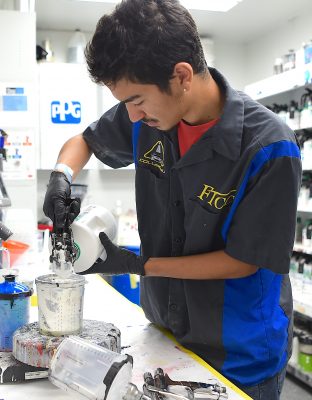 “The first couple of semesters, he was trying to figure out how to interact with the older students,” he said. “They took him under their wings, and it worked out pretty well from that standpoint.”

Izzy chose to do a complete paint job on his grandfather’s 2001 Mitsubishi Eclipse for his final project. He plans to own and drive the car someday. Two students worked with him on the sports car. The project earned an A. Irish said he was impressed with the quality of Izzy’s work.

“He learned as quickly as the other students, had very good work ethic, showed up on time and sometimes, he stayed late or came in when he didn’t have class,” Irish said. “He was a good student, and everyone here enjoyed having him in the program. We’d love to have another 15 to 20 students like that in the program.”

Izzy’s achievements earned him recognition by Cumberland County Schools. He was named the “Standout Senior” at Polytechnic, joining more than a dozen other students across the county at their respective high schools. Matthews described Izzy’s progression during the last four years as “phenomenal.”

“He has blossomed into something he’s found an interest in, and I couldn’t be prouder of him,” she said. “He’s never faltered in that program, and he has done tremendous. He was an outstanding student.” 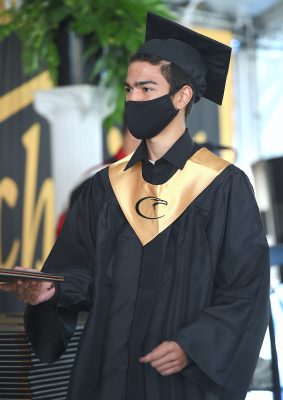 Izzy Villegas receiving his associate degree during the 59th Annual Commencement Ceremony for FTCC on May 14. [Photo/Brad Losh]

Zuleira Villegas, Izzy’s mom, attended his graduations from FTCC and Cumberland Polytechnic High School. She watched him walk across both stages. Each time, she kept the growing tears from falling off her eye lids. He’s the first grandchild on both sides of her family to graduate high school and earn an associate degree.

“He started high school not knowing what he wanted to do, and figuring it out within a four-year span,” she said. “He went from being very quiet to he wouldn’t stop talking about what he was doing in class, and the older guys treating him like he was their own kid or as a brother. His father and I are proud of him. Ecstatic.” 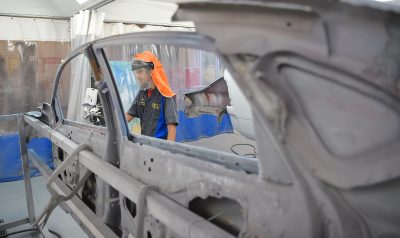 Izzy Villegas works on a vehicle inside the paint booth in FTCC’s Collision Repair & Refinishing Technology Center in May. [Photo/Brad Losh]

Izzy knows where he sees himself in the future. He wants to work for a collision center. Also, he plans to build and own a shop in his backyard with “plenty of tools and dogs,” he said. His time in high school and at FTCC are finished, but he knows learning won’t stop. He’ll take classes to become certified to do work on different manufacturers’ vehicles as his career progresses.

“I definitely picked a field that helped me develop, and it’s important for you to pick a field that helps you mentally and is something you enjoy,” he said. “All of the instructors [in the collision program] are pretty great. They really made the program enjoyable.”

Villegas shared something about Izzy he may not be aware of involving his younger sister, 17-year-old Issa. She’s shared with friends and family on social media how proud she is of her brother. Villegas said one day, when her daughter’s phone rang, she noticed the caller name said “My Motivation.” Curiosity prompted Villegas to ask her daughter about the caller’s real name. 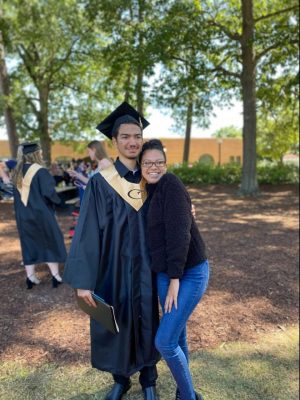 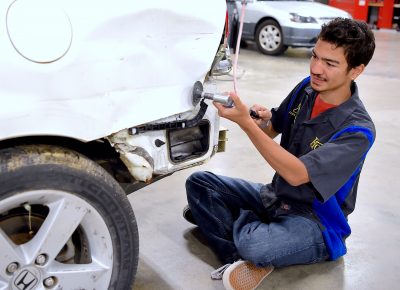 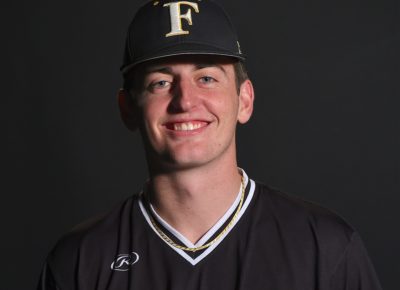 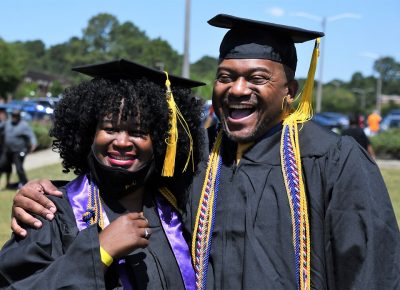 By Catherine Pritchard
Fayetteville Technical Community College celebrated its Class of 2021 in an in-person commencement ceremony on the Fayetteville campus on May 14 and a virtual ceremony ...
View all
Back to Top
Veterans Services