The Fayetteville Tech men’s basketball roster will sport a new look for the 2019-20 season, as the Trojans return just four players from last year’s squad.

Leftwich is the only returning of the Trojans’ top five scorers from last season, when he averaged 11 points per game. The other four Trojans who averaged double-digit points last season — Zach Boggs, Johnny Hughes, Tyler Lloyd and Nick Kuhns — were all sophomores.

Harbison was a key contributor in the frontcourt, playing in 27 games and averaging 2.3 rebounds and 1.6 assists.

Collins played in 28 games, pulling down 2.5 rebounds and scoring 3.5 points on average. 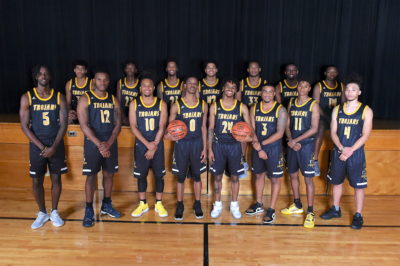 In addition to those returners, the Trojans get back starting point guard Josh Haymer, who redshirted last season after two games following an ACL tear.

The Trojans welcome transfer players Darius Hester, who was previously at Thomas Nelson CC, and Nick Hargrove, a Georgia native who was at Olive-Hardy in Chicago last year.

Nine freshmen round out the 16-man roster, including seven from in state.

Also from in state are guard George Jones Jr., who was named to the N.C. Basketball Coaches Association East All-star roster while at Pamlico County High School.

Guard Aaron Gunnells, a 6-foot freshman, is from Detroit.