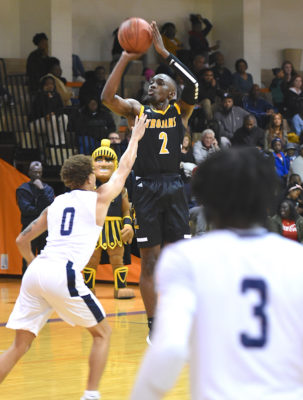 Fayetteville Tech guard Gabe Harbison is making the jump to four-year competition, signing his National Letter of Intent with St. Andrews on Thursday.

“I thought the campus was very much my style, very chill,” Harbison said. “I’m not looking to do much other than focus on school and basketball. When they contacted me, I thought, ‘OK, this is an option where I can go ahead and make an impact.’”

Harbison earned an Associate in Arts at Fayetteville Tech, most recently making the Region 10 All-Academic team for the spring semester. He plans to study sports medicine at St. Andrews.

Trojans head coach Brian Hurd said he was elated for both Harbison and the Knights, whom he said were getting a quality student and player in the guard.

“St. Andrews is getting a very athletic wing that can score at all three levels,” Hurd said. “He can shoot the 3, obviously. He can get into the middle of the lane, where he’s got a great floater and can pull up from mid-range. And he can use his athleticism and get to the rim.”

As part of a deep backcourt for the Trojans during the 2019-20 season, the 6-foot-2 sophomore played in 30 of 31 games, finishing the year with 4.8 points per game and a 28.2 shooting percentage from behind the 3-point line.

Both were improvements over his freshman season, but Harbison said the biggest development while at FTCC was in his basketball IQ.

“Coach Hurd and (assistant coach Patrick) Hair did a very good job of teaching me the IQ of the game and how to slow things down, look at different options,” Harbison said.

Hurd said Harbison built on his natural athleticism while at FTCC.

“His athleticism carried him a long way to score in high school,” Hurd said. “Once you get to the college level, even junior college, you can’t just be faster, stronger and more athletic than everybody. Gabe was able to use that athleticism and learn to play in a system.”