“Come in, develop, get your education and prepare for the next level,” Hurd said.

The sophomores of the 2018-19 certainly fulfilled that goal, with seven of the nine classmates going on to four-year institutions.

Boggs, now with Fort Valley State in Georgia, will suit up against Duke in an exhibition game at Cameron Indoor Stadium on Wednesday, Oct. 30. 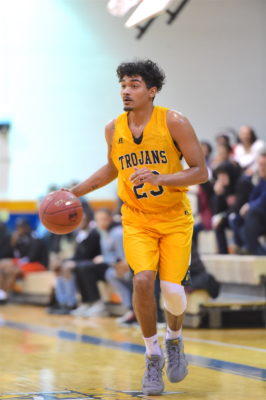 Hughes and his teammates at Mount Olive will travel to PNC Arena on Sunday, Oct. 27, for an exhibition against N.C. State.

This will be Boggs’ first time inside Duke’s iconic 79-year-old basketball arena, located less than an hour from the 6-foot-3 guard’s hometown of Sanford.

“It’s a blessing,” Boggs said of the opportunity. “A lot of kids, especially where I’m from, grew up wanting to play for Duke or Carolina.”

Boggs said the Wildcats won’t be satisfied with just experiencing playing against the Blue Devils. They’re looking to compete.

“We’re really going in there to win,” Boggs said. “We’re not going to lay down for anybody.”

Boggs was the Trojans’ scoring leading last season, averaging 15.4 points per game. Hughes, a 6-foot-8 Fayetteville native, averaged a double-double on the year, scoring 15.1 points and 11.1 rebounds per game. 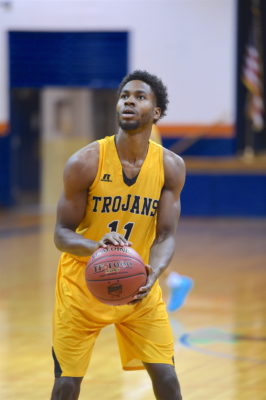 Boggs and Hughes each played two years at FTCC under Hurd, whom Boggs said he considers a lifelong mentor.

Boggs said his time at FTCC helped prepare him mentally for the rigors of playing at a four-year program.

“My role at FTCC was to be the leader of the team, and it taught me how much discipline and leadership matter,” he said. “I learned how important it is to put ego aside to be a leader.”

Boggs said that approach has continued to develop at Fort Valley State.

“The team is really coming together,” Boggs said. “There’s no ego, and we play as one unit. We’re going into this game (against Duke) feeling really competitive and really excited.”