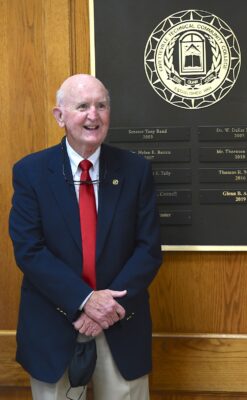 Lancaster, a member of the Cumberland County Board of Commissioners and former coordinator of FTCC’s Small Business Center, was honored Monday, Aug. 18, at the monthly meeting of the College’s Board of Trustees

Lancaster spent 33 years as a principal and teacher in the Cumberland County Schools, retiring in 1992. He then served as the coordinator of FTCC’s Small Business Center for 18 years, retiring

from that post in 2005. He has also been an adjunct professor for Methodist University. 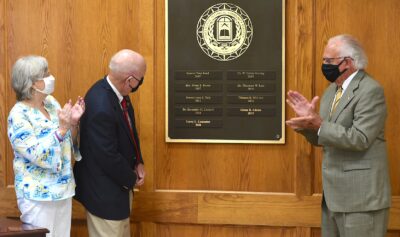 His other current and past community service includes serving on the Cape Fear Valley Hospital System Board of Trustees; the Cumberland County Civic Center Commission and its board of directors; the State Employees Credit Union Advisory Board; and the Cumberland County Area Mental Health Board. He is a past district chairman of the Boy Scouts of America and a recipient of the Order of the Long Leaf Pine.

Lancaster received B.S., M.A. and Ed.S. degrees from East Carolina University. He is married to Debra Fields Lancaster. They have two children and three grandchildren.

Fayetteville Technical Community College offers a wide variety of low-cost, high-quality academic, occupational, technical and continuing education programs that can lead directly to careers or that can transfer into four-year colleges and universities.