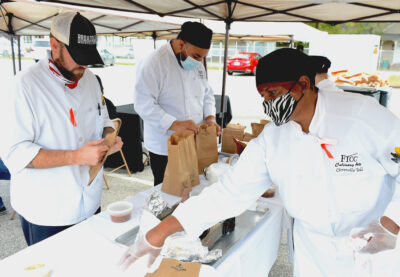 FTCC culinary student Citronella Todd didn’t ponder long when asked the kind of event she wanted to work on for a school project.

“Feeding the homeless or those in need was my number one choice,” said Todd, who is 60.

Her wish became reality this month when the College’s Culinary Arts program, its Sociology Department and the nonprofit Alms House in Hope Mills partnered in an event that provided hot and hearty soup meals to people in need in recognition of World Food Day. Todd led the effort.

“I could not have chosen a better event,” Todd said. 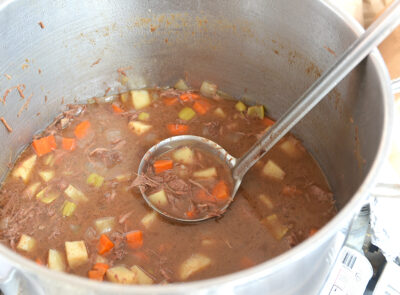 Beef stew was one of the soups served at the World Food Day event in Fayetteville. [Photo/Brad Losh]

World Food Day, which promotes awareness about hunger, poverty and healthy diets, was officially observed on Oct. 16. The local event was held on Oct. 9 to accommodate FTCC’s academic schedule.

Volunteers gathered at the YMCA in Hope Mills to package and give full meals to those in need. Besides those from FTCC and the Alms House, volunteers included officials from City of Fayetteville and the Town of Hope Mills and Cumberland County Schools.

“It was a great event, and the leftovers we had went to the Alms House to distribute later,” Todd said. “The soups were great. Cars came for curbside pickup. It was very successful.”

Two types of soup were offered. One, a beef stew, contained roasted potatoes, onions, and other vegetables. The other was a vegetarian soup consisting of thick, melted cheddar cheese paired with roasted broccoli and onions. The meals were served in brown bags, held closed with stickers bearing the message “homemade with love” and a hand-drawn red heart. 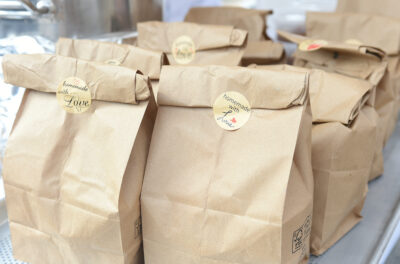 Soup and bread were served in brown bags sealed with a “homemade with love” sticker. [Photo/Brad Losh]

Todd said one of her goals with the event was to show the people who came for a meal that they are seen and supported.

“I want them to know that we care and… that what we gave is coming from the heart,” she said. “When you do things out of love and excitement, others feel it, too. It’s one of the most fulfilling things in my life to do that.”

This is the second year that FTCC has observed World Food Day. The idea to participate and involve students came from Chef Carl Miller, chair of the College’s Culinary Arts Department, and Dr. Kenjuana McCray, FTCC’s Psychology and Sociology Program Coordinator who also serves as a Town of Hope Mills Commissioner and Mayor Pro Tem. He said he believes it’s important for students to learn to give back and to realize the needs that exist in their community and the wider world.

Many people don’t have access to three meals a day, said Miller, who spent many years as an executive chef at hotels and resorts in foreign countries with widespread poverty. In those places, he said many less fortunate people struggle to secure even scraps of food for themselves and their families.

But there is also need here in the United States. In some restaurants in this country, Miller said, he saw employees take extra meals – out of need, not desire.

“At work, this could be the only hot meal they get,” he said. “Some people don’t know if they’re going to get a meal tomorrow or today. In third world countries, they’re hunting all day to gather something for a meal. I understand this [hunger] can be a problem, and we can try and do our part and give back.”

Through the years, Miller said, he has seen how volunteer events have affected his students. He said many start to understand the importance of helping for a good cause, and the happiness that can bring. He also believes community colleges have a responsibility to lead in such efforts and to be involved in their communities.

“The big thing is teaching our students how to network and give back to the community,” he said. “We want them to get out into the community, have a relationship with the community. They realize they are doing this for a good cause, they’re happy to do this and we have to do things to help.” 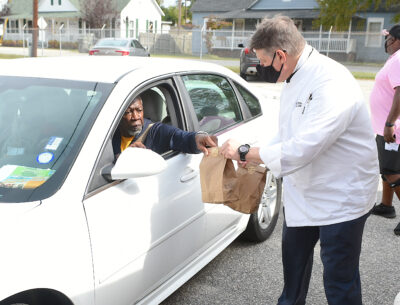 Todd had already absorbed this knowledge. She said her life experiences have taught her to be grateful for what she has, to not be judgmental of others, and to recognize that when people work in groups, differences can be made. She considers herself fulfilled when those who have been helped simply smile as a response.

“One thing I always tell people is never cook with an attitude because it will taste nasty,” she said. “If you cook with love and care, it will taste so much better. And I want to spread love, it comes from the heart, it’s not just words.”

Todd wants one day to have her own restaurant or food truck and to also operate a 24-hour kitchen for the hungry. She plans to graduate from FTCC as a double major in culinary arts and hospitality management in 2021.

“These degrees will help me in some ways to accomplish that goal as I won’t have any excuse to say ‘I can’t’ with the right certifications,” she said. “It’s my heart’s desire to feed the hungry. Everyone out there isn’t bad, it’s just that life happens. It’s not for publicity, it’s part of my heart and purpose, to reach out to the less fortunate.” 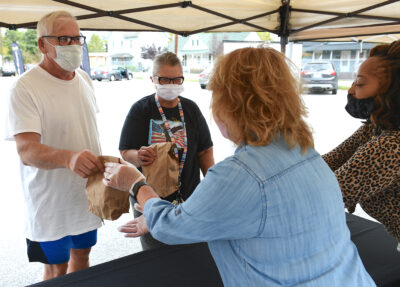 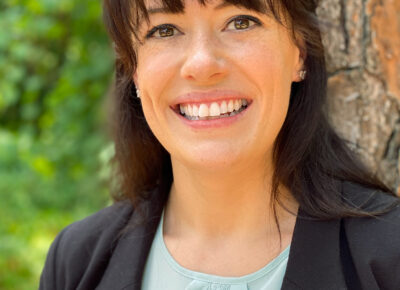 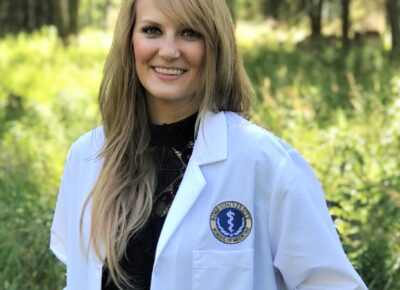