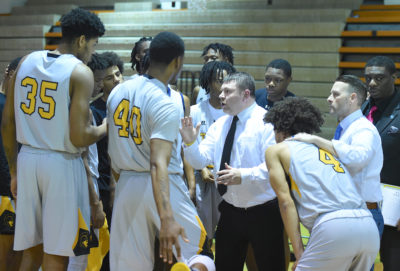 FAYETTEVILLE, N.C. — Fayetteville Tech’s men’s basketball team has played its way into the quarterfinals of the postseason.

The Trojans (15-15), seeded eighth, topped No. 9 Guilford Tech 87-83 on Monday to earn a spot in the quarterfinals of the NJCAA South Atlantic District A/Region 10 Tournament.

The Trojans will take on top seed Davidson County on Thursday at noon in the first quarterfinal of the day.

“We’re seeing the program go forward and taking the next step,” Hurd said. “Our recruiting has a lot to do with it. And then we’ve had some players that have led the team and us coaches can just come in and adjust.”

Monday’s opening-round contest was a dogfight, with the Trojans struggling to gain ground inside against the Titans.

After a 41-41 halftime tie, Guilford Tech built a lead of as many as nine points, at 66-57, before FTCC began to chip away at the margin on a surge of rebounding.

Sophomore guard Josh Haymer gave the Trojans a 79-78 lead on a pair of free throws with about 2:30 to play, and some late defensive boards sealed the win.

With the lane heavily contested much of the game, the Trojans leaned on their backcourt. Freshman guard Collin Lewis led the team with 21 points, and sophomores Haymer and DeShaun Leftwich each added 16.

The win was the team’s fifth victory in six games, a stretch of success that Hurd said showed consistency.

“Earlier in the year, we were struggling to find consistency,” the coach said. “Now, we’re finding a balance on the offensive and defensive side of the ball within our schemes. We’re not just saying that we’re going to compete in each game. We’re going to compete on every possession.”

The Storm (28-1) finished third in the final regular-season rankings for NJCAA Division II. DCCC averages 104 points per game, second in the nation across all divisions only to Sandhills Community College.

“The pace they play is unbelievable,” Hurd said.

To succeed, Hurd said, the Trojans will have to play their best perimeter defense, combating a sharp-shooting Storm that’s made 304 3-point goals in 29 games.

“We’ve got to guard the 3-point goal line better than we have all year,” Hurd said. “And we’re going to have to rebound well. That helped us against them the first two times we played.”

The quarterfinal winner will advance to Friday’s semifinal at 2 p.m. against the winner of Pitt CC and Wake Tech. The tournament final is noon Saturday.