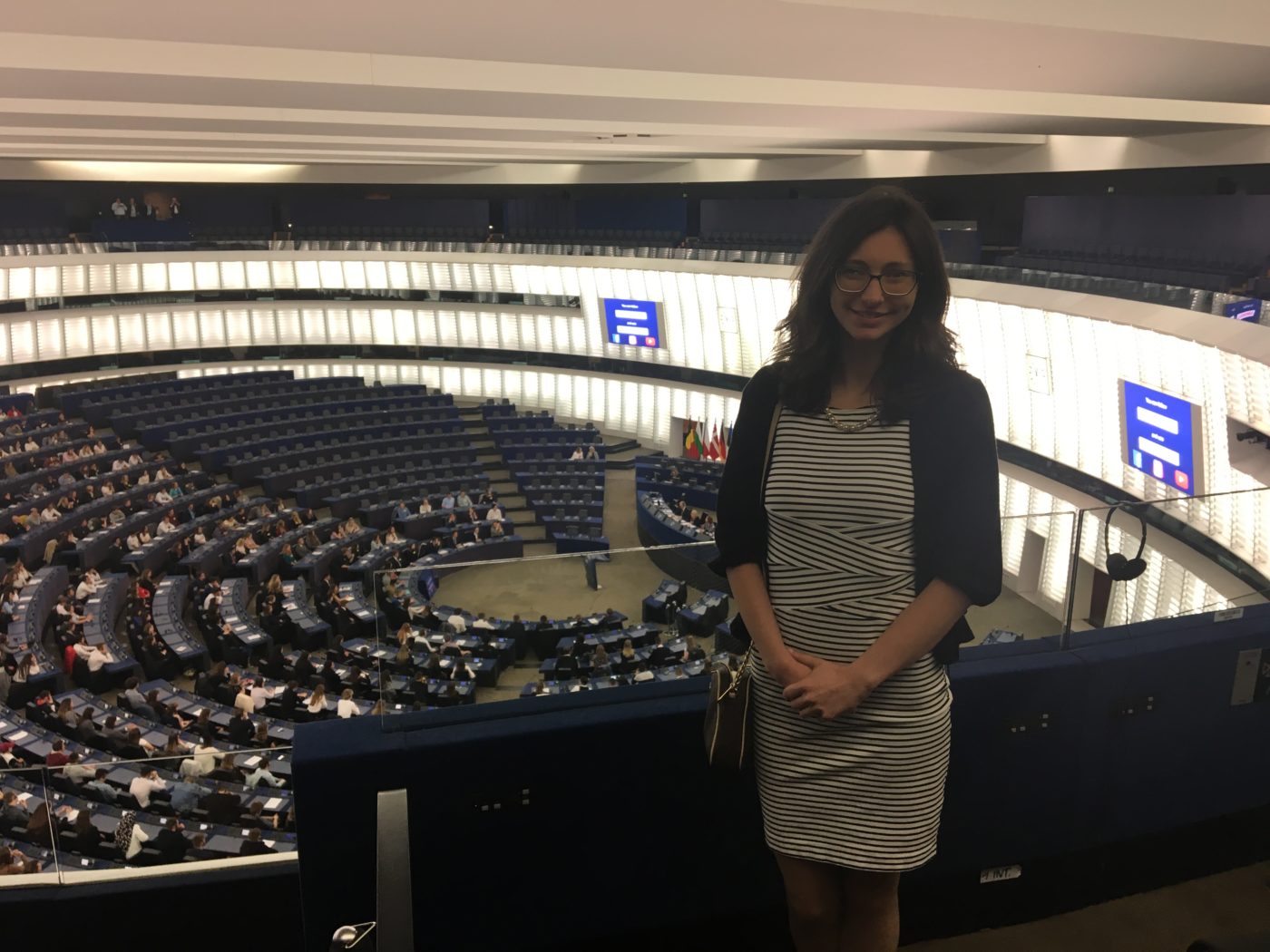 “FTCC really understands the importance of having fellowship with their students, and I absolutely love that.”
-Sarah Bammel

She’s the first student from FTCC to receive the top scholarship award.

Bammel is studying funeral service education. FTCC is the only accredited mortuary school in North Carolina; it’s also one of 57 across the nation. Bammel learned of her achievement via phone call. Her first reaction? She screamed. The caller on the other end of the phone wasn’t prepared.

“That poor woman… She laughed so hard, but her eardrums are fine,” Bammel said with a laugh during a phone interview. “And then I broke down in tears, tears of joy. I couldn’t believe it.” 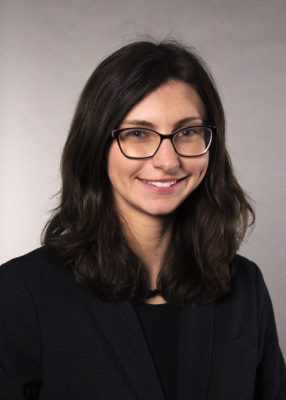 A panel selected 50 finalists from more than 100 candidates this year. Fifty finalists received a scholarship award – 35 recipients received $1,000; 12 earned $3,000 and three, $5,000. SCI calls itself the largest provider of funeral, cremation and cemetery services in North America, according to its website. Scholarship applicants must be enrolled in a college or university program with accreditation from the American Board of Funeral Service Education (ABFSE). Applicants must also write an essay and submit a video about helping others and funeral service, according to SCI’s website.

Bammel’s honor culminated with a trip to Houston, Texas this past spring to receive her scholarship. She met other recipients along with funeral industry leaders as a networking opportunity. Bammel also met a funeral director based in New Bern and later, toured his establishment.

“It was one of the best experiences,” she said. “I keep in touch with the people I met in Texas and have built relationships with them. They are all passionate people.”

The scholarship reception also served as the first time Bammel met other students studying in her field as a dual student. She studies online at FTCC. She’s also enrolled at East Carolina University, studying interpersonal relations and business studies. Her major is through the institution’s “university studies” program, allowing her to create her own degree. She’s also pursuing a minor in French at ECU. Bammel plans to graduate from ECU this December and from FTCC in 2020.

A future in funeral industry wasn’t always the plan for Bammel. She initially wanted to pursue culinary arts living in New Jersey. Her interest changed, shifting to helping people. Then, her family moved to North Carolina, settling in Huntersville. Graduating from William Amos Hough High School required completing a two-year senior project. She chose the Serenity House, a hospice home.

The project required only 15 volunteer hours. Bammel accrued more than 100 before she graduated. 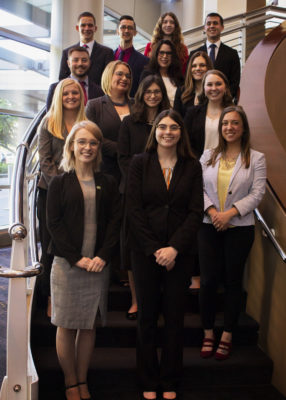 Bammel was only 16 years old at the time when she volunteered at Serenity House. One patient’s final moments was with Bammel. She and another volunteer made sure the elderly patient was comfortable. Bammel isn’t sure if the woman knew she was there. She stood by the bed, placing her hand nearby. The patient’s family couldn’t make it in time.

“It was one of the most peaceful things I ever saw,” Bammel recalled. She admitted at first, she didn’t know what to do when the patient died. “We wanted to make sure everyone passed away in a respectable and dignified manner. I realized this was a population I want to work with.”

She added, “My main focus was the patients. Being able to care for others and learn about how we need to take better care of our seniors, it was absolutely amazing. I learned so much about the whole process of healthcare to passing away. It’s a beautiful thing to be there for people as they’re going through the process.”

Bammel also interviewed a local funeral director for her senior project. He became a mentor to her. Others have paused when Bammel tells them the funeral industry is her career choice given her outside appearance – a petite, young woman, she said. Bammel’s passion and the funeral industry’s purpose intertwine. 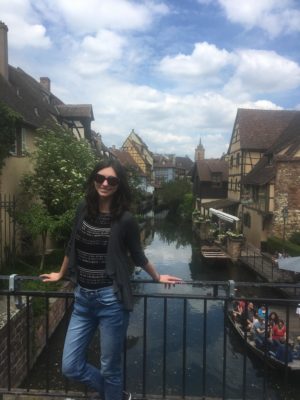 Sarah Bammel in Strasbourg, France during a study abroad trip she took in 2019. (Submitted)

“The entire industry is not about what you want or need, it’s about what the client, the patient and the family needs,” she said. “You have to put them above yourself. That was something that resonated with me, and I love it. I knew I belonged in an industry that’s really care-oriented, being an advocate for the deceased, the family.”

Bammel enrolled into FTCC’s program after her freshman year at ECU. FTCC’s Department Chair of Funeral Service Education, Ronald Montgomery Jr., encouraged her to apply for the SCI scholarship. Receiving the scholarship was a “godsend” for Bammel so she won’t have to take out a loan. The reward will go toward tuition.

Montgomery was the first person Bammel told about the scholarship win.

“I am very proud of her accomplishments, and I look forward to working with her as she progresses through the program,” Montgomery wrote in an email. “She has a bright future ahead of her in the profession of funeral service.”

On the right path

This summer, Bammel studied abroad in Europe, visiting Strasbourg, France; Germany, castles and even cemeteries. A highlight from the trip was seeing a variety of funeral homes in France and learning the differences between their funeral industry and America’s. She walked down streets and saw multiple funeral homes with flowers and statues in the windows. The trip reinforced why she cares about learning other cultures.

“It’s really important to understand the people in your community,” she said. “Everyone is so different, and that directly correlates to other peoples’ needs. I never thought I would be bilingual, and now that I’m getting good with French, I’m thinking of taking up Spanish.” 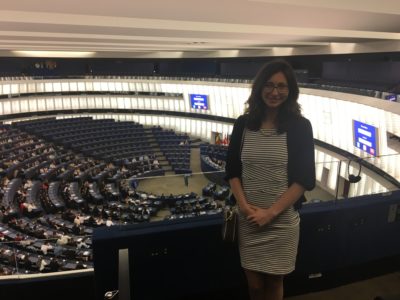 Pictured is Sarah Bammel, a dual student at FTCC and ECU, standing inside the European Parliament in Strasbourg, France. (Submitted)

Looking ahead, Bammel aspires to work as a licensed funeral director and embalmer. She also wants to teach funeral classes as a professor – even internationally. While in school, she’s doing work that’s not required. She’s researching with an ECU professor about how funeral directors use nonverbal communication in the industry. She admitted her research has been met with some criticism from those in the field, suggesting she’s wasting her time, even calling it pointless.

There’s one thing the SCI scholarship told Bammel: in her own words, she’s on the right path. The judges selecting her as a scholarship recipient made Bammel feel heard. And some of the work she’s doing, from the research paper to pursuing a bachelor’s degree, isn’t necessarily required to be successful. She does it because she “wants” to.

“They understood all these things I’m doing is for a purpose,” Bammel said about the scholarship panel and her mentors. “I don’t have to do any of this, but I do it because I’m passionate. Thinking of where I was five years ago, this has become my new life passion, and how much I’ve changed since then. It will pay off in the end. And without FTCC, this wouldn’t be possible. Really.” 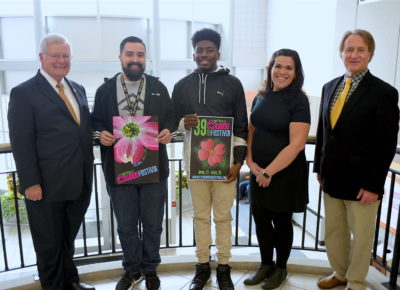 By Alicia Banks
Two natural disasters left Fayetteville Technical Community College’s Wesley A. Meredith Horticulture Educational Center without a greenhouse for more than a year. That changed Dec. ...
View all
Back to Top