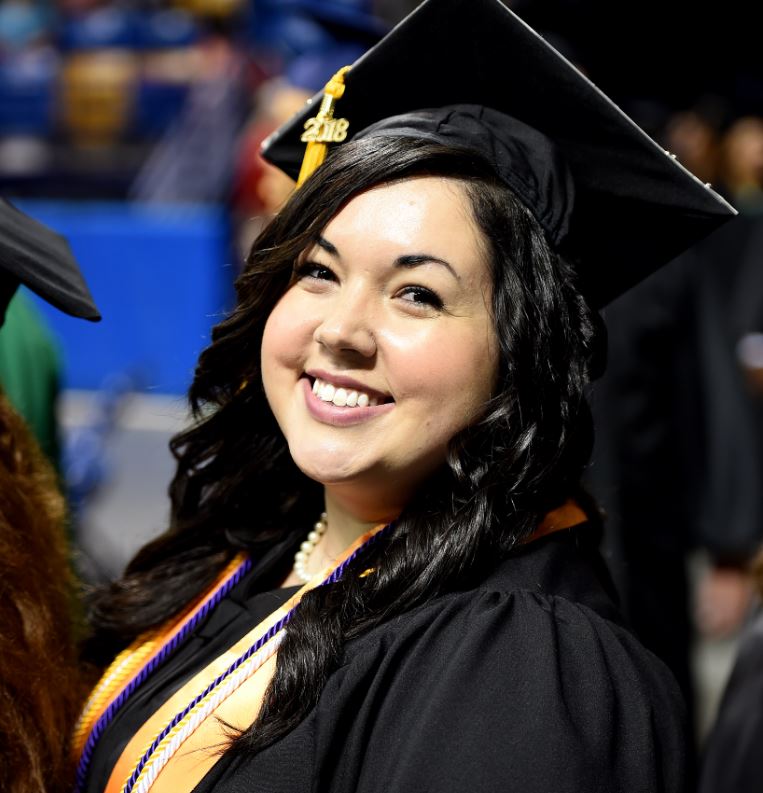 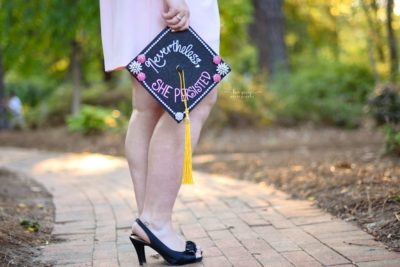 One graduate’s story about failures, motherhood, family and persistence

Nearly three years ago, Danielle Losh plummeted to her lowest point. Her marriage ran its course. She lived in Wisconsin, her former husband’s home state, at the time. She had nowhere else to go but back home – more than 1,000 miles south to North Carolina. All she had to her name was $100, a Kia Sorrento, two dogs and her son, Liam, who was 2 years old at the time. It was November 2015.

“I didn’t have a job lined up, and I didn’t know what I was going to do,” Losh said.

Before the marriage, Losh was in school. She attended the University of North Carolina at Charlotte. She decided to be a stay at home mom after Liam was born. A life short-lived for Losh. She knew what returning home meant for not just her, but Liam, a little boy with a warm smile and now an owner of a sharp pair of blue-colored glasses – one of his best features.

“I knew I needed to go back to school and get a degree,” Losh remembered about the decision to move back home. “I knew I had to pick myself up and do it for my son and make a better life for us. I was bound and determined not to be in that situation again. I knew that school was the only way to do it.”

Not only was school the right choice for Losh, so was returning to her family. Her father, Brad Losh, met his youngest child and grandson in West Virginia. He filled Losh’s gas tank and bought them food for the second leg of the trip. Brad Losh was secure in his daughter’s decision. 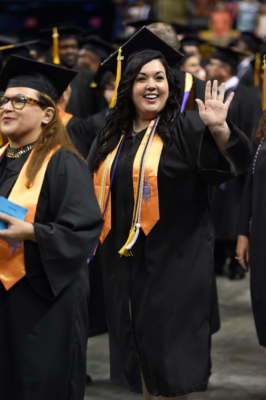 “As a parent, it’s really hard to watch your child hit rock bottom,” he said. “Sometimes, as a parent, you can’t do anything but sit back and watch, but you know what they gain in the end will be worthwhile. Now, she’s one h— of a mom.”

He added, “Watching her through the trials and tribulations at such a young age, it was difficult, but I knew she’d become an amazing young woman at the end of the journey.”

The pair along with Judith Anne Losh renovated a home she owned in Lumberton. Judith Losh is Losh’s mom. It was Losh’s childhood home and now would become a “home” for her and Liam. Judith Losh didn’t hesitate to help her daughter with daycare and living expenses. Those values instilled in Judith Losh came from her parents.

“My parents raised me to believe your family is everything, and you take care of your own first,” she said. “I told her, ‘We will do this.’ There was no choice, no thinking about it. Just, I got your back.”

Then, the time came for Losh to do her part. She began working as a secretary for a small county facility in Robeson County. Enrolling in college again was the next step. She chose Fayetteville Technical Community College, an easy choice for a few reasons. She enrolled in a mostly online program, healthcare management technology. Online courses eased juggling a full-time job and being a single parent. In addition, Brad Losh has worked at FTCC as a media specialist for nearly 30 years; he has been a professional photographer for 38 years.

“My dad was really excited about me coming here, and I’ve seen he has so much love for the school, and to see me graduating from the school would be awesome for him,” she said. “And the instructors are great. I’m glad I chose FTCC.” 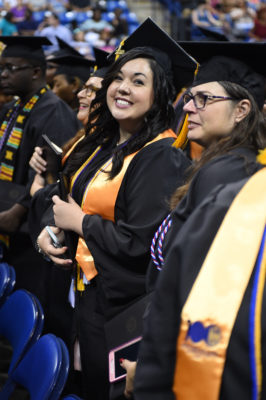 As Losh fulfilled her end of the bargain, so did her family. Judith Losh said her daughter rarely asked anyone to watch Liam. However, mother and father knew they had to offer help. Liam would stay with his granddad while Losh went to campus for an hours-long science lab one semester. On weekends, Liam would stay with his grandma.  Some days, when Liam knew mom had to concentrate, he would quietly cozy up next to her with his iPad or a book.

Help from her parents, and close friends, was something Losh appreciated. Sometimes, she wasn’t sure if graduating was possible when homework assignments turned tedious or studying for exams became overwhelming, coupled with motherhood and working.

“I don’t think I would have had that much driving force to do better had I not had Liam,” she said. “When you have a 2 year old looking up to you, you have that driving force to buckle down and make a better life. He was my reason for all of it. If it was just me, I may not have cared that much. My child deserved better, and I deserved better. I didn’t before, but I know my worth now.”

Losh, 25, styled her black hair in large spirals. A cap covered the top of her head with a gold tassel swaying in between her curls as she walked the floor of the Crown Coliseum. A charm with “2018” clasped around the tassel. Her gown was black. Her stole was gold with the Greek letters Phi Theta Kappa, an honor society she joined. The purple and silver cords around her neck recognized Losh as a member of FTCC’s chapter of the National Technical Honor Society. The society recognized students who excelled in the technical educational fields as their profession. Her GPA? A 4.0

It was graduation day. Her mother, Liam, Grandfather Joseph Lakawicz and close friends waited in the crowd to see Losh walk the stage as one of 2,498 curriculum graduates. Brad Losh, with a Nikon camera in hand, waited at the stage’s end to capture a picture of his daughter accepting her degree.

“I knew the shot I wanted to take of her, and I told her I would be waiting to give her a hug,” Brad Losh said. “As a dad, I’m proud. She’s a very smart girl, and she’s starting to realize her potential.” 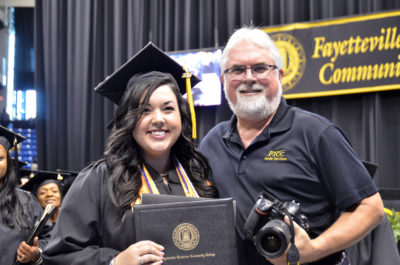 Danielle Losh stands with her dad, Brad Losh, after she graduated from FTCC on May 18, 2018. [Photo/Natasha Brown]

After Brad Losh snapped the picture of his daughter, he hugged her. Her family, a few feet behind them, cheered as Liam shouted, ‘Yay, Mommy! You did it!” Judith Losh said Liam was “her voice” in that moment.

“It was an absolute shining moment, my heart was so full, and my heart overflowed into my eyes just a little bit,” Judith Losh remembered. “To see her smile all the way up to her eyes, to see the relief on her face was worth every single moment of her struggles and convincing her she could do it. Now she knows she can make it through anything and take care of her son.”

Roughly, two weeks after graduation, Losh received a job offer to work as an optometric technician for an eye doctor’s office in Robeson County. Losh said the job offer so soon after graduation was unexpected. She also plans to pursue her bachelor’s degree in the coming year. Judith Losh hopes there’s a lesson others can take away from her daughter’s journey so far. 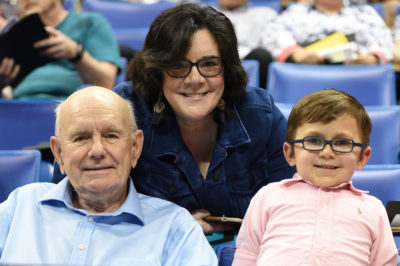 “I hope other women can look at her story and say ‘Because she did it, so can I,’” she said. “Whether it’s your family of friends or whoever it is, there are people out there who will help you, but you have to do the work. The help is there. I’m very grateful I was a part of #TeamDanielle.”

The family will celebrate another milestone this year. Liam will graduate this month from a preschool in St. Pauls. He’ll start kindergarten this fall. How Danielle describes everything in her college journey is in the sparkly, white and pink decorations in her graduation cap. A phrase: “Nevertheless, she persisted.”

“It was very fitting for my journey,” Losh said about the phrase. “For a longtime, I’ve been dreaming of graduating. That phrase stuck with me. When I could have easily given up, I saw [Liam] was looking up to me. I want to make him proud so when he grows up he knows, ‘If mom did this, then I can do this.’” 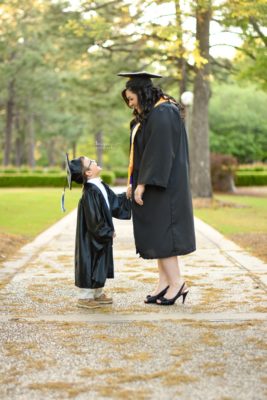 From left to right, Liam stands with his mom, Danielle Losh, for a photo shoot celebrating both of their graduations this year – hers from FTCC and preschool for him. [Photo/Lori Yerry Photography]