“Yes, we want to win, but these girls are in it because they really love playing volleyball.” — Trojan volleyball player McKenzie Smith

Back in high school, McKenzie Smith set her sights on being a collegiate volleyball player.

The odds were tough for Smith — still McKenzie Wilson then — in the competitive volleyball environment of her hometown of Herriman, Utah.

“I came into volleyball surprisingly late,” Smith said. “I was 12, but I had been a dancer until I got too tall. Most of the girls my age who played volleyball had been playing since they were four.”

But at 6-foot-1 and possessing a keen awareness around the net, Smith was a quick learner and, after graduating from high school in 2017, landed a spot at Western Wyoming Community College, a two-year program about three hours from her hometown.

The experience wasn’t what she hoped for. The time and travel demands of athletics took a toll on her academic performance, and Smith found herself struggling with her five-class course load.

“It seemed like I was always missing class to travel or play, and I didn’t feel like the coaches had my best interest or my academics in mind,” Smith said. “I started failing out of classes. The coaches weren’t worried about me and were only worried about volleyball.”

At the end of the season, Smith decided she wouldn’t return for another year at Western Wyoming.

“I told my coaches that I just didn’t love the sport anymore, and I couldn’t give them the dedication they needed on the team from the girls,” she said.

Instead, Smith returned to Utah and took a job at a call center. 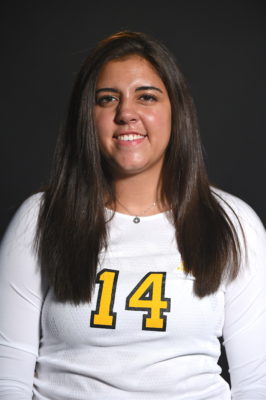 In the meantime, she had reconnected with a former boyfriend, Caden Smith. The pair had split while McKenzie was at Western Wyoming and Caden had joined the military.

“I didn’t think I could handle military life, but I would fly off to see him when I was on breaks from volleyball,” she said.

McKenzie and Caden got engaged in March 2018, shortly after he moved to Fort Bragg from Fort Benning, Georgia, and married the following June. McKenzie joined him at Bragg in July 2018.

McKenzie looked into the volleyball program at Fayetteville Tech when she first got here, but decided she wasn’t settled enough to take on school and volleyball all over again.

Instead, she joined the women’s league at Fort Bragg and rediscovered the love she had for the sport.

“I was playing with this group of ladies and going to games every Thursday night,” Smith said. “I just remembered how much I loved it, and Caden saw it, too.”

In spring 2019, Smith decided to reach out to coach Moe Licardo about joining the Trojans.

“I didn’t even know if Moe would want me to play because it’d been so long since I had played at a high level,” Smith said.

Licardo liked what he saw right away.

“First of all, you can’t teach height,” Licardo said. “I figured it would take some time to adjust. Not only is this a whole new system for her, but every coach is different. But after going to a couple of open gyms, she got right back into.”

Smith is now a steady presence for the Trojans at middle blocker. The sophomore is averaging 1.80 kills per set and has 15 total blocks through the first eight matches.

“She’s becoming a leader,” Licardo said. “That might be her age or her experience of being a military wife where she’s learned to adjust to things quickly. She’s become a leader by example.”

Smith, who is pursuing her nursing degree, has found the experience at Fayetteville Tech she’s been looking for from college athletics all along.

“The coaches here want us to be students first,” she said. “And this team, it’s not just about winning. Yes, that’s an important factor and we want to win, but these girls are in it because they really love playing volleyball.”