A program focused on minority male success thrives on campus

Our story spotlighting FTCC’s Minority Male Mentoring Program is part of our efforts to celebrate April as #CommunityCollegeAwarenessMonth. Each week, we’re sharing a fact about NC Community Colleges, and how it’s seen here at FTCC.

Fact Four: Minority Male Mentoring Programs secures support through appropriations provided by the NC General Assembly and the federal NC College Access Challenge Grant. The program began in 2003 and since, has striven to increase retention and graduation rates among minority males through specialized outreach such as service learning and professional development. (Source: NC Community Colleges)

The Minority Male Mentoring Program (3MP)  has collaborated with Fayetteville State University on speaking events, participated in the “Adopt-a-Highway” program and “Shop with a Cop,” helping to provide Christmas gifts for families in need through the years on our campus. Members have also attended 3MP statewide conferences in Durham and Greenville. Current 3MP coordinator Casey Groover said the program is essential for student retention at the college, paving the way for future graduates to have successful careers. Groover serves as the campus’ coordinator for disability support services.

“FTCC would like for its student population to expand,” he said. “The potential growth and impact our student body can have on vocational developments throughout Fayetteville is promising.” 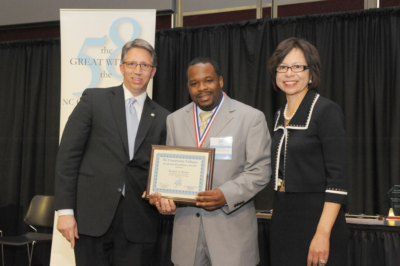 FTCC’s Associate Vice President for Academic Support DeSandra Washington served as a former coordinator for 3MP. The program included students who were at times as young as 21 years old and up to 50, allowing them to “learn from each other” and be successful. One of those successes was former student Brandon Barney. He received the NC Community Colleges “Academic Excellence Award,” an honor given to one student at each of the state’s community colleges annually, while attending FTCC. Barney was also part of the Carolina Student Transfer Excellence Program (C-STEP), providing students from 10 community colleges across the state a seamless transfer  to the University of North Carolina at Chapel Hill after graduating with an associate’s degree.

“This program gave them a platform to be supportive, fellowship and be a ‘brotherhood,’” Washington said. “It was powerful to see the older students mentor and help the younger men. This is one of the most beneficial initiatives we have at FTCC to help improve the overall life of male students not only academically, but emotionally for male support.”

And there’s a level of support Groover wants to provide as coordinator. He decided to get involved with 3MP as a way to promote substantial progress in the lives of others.

“3MP is a really good idea for providing all students with resources to further their education,” he said. “We want to have a large group of students to move forward in their academic pursuits.”