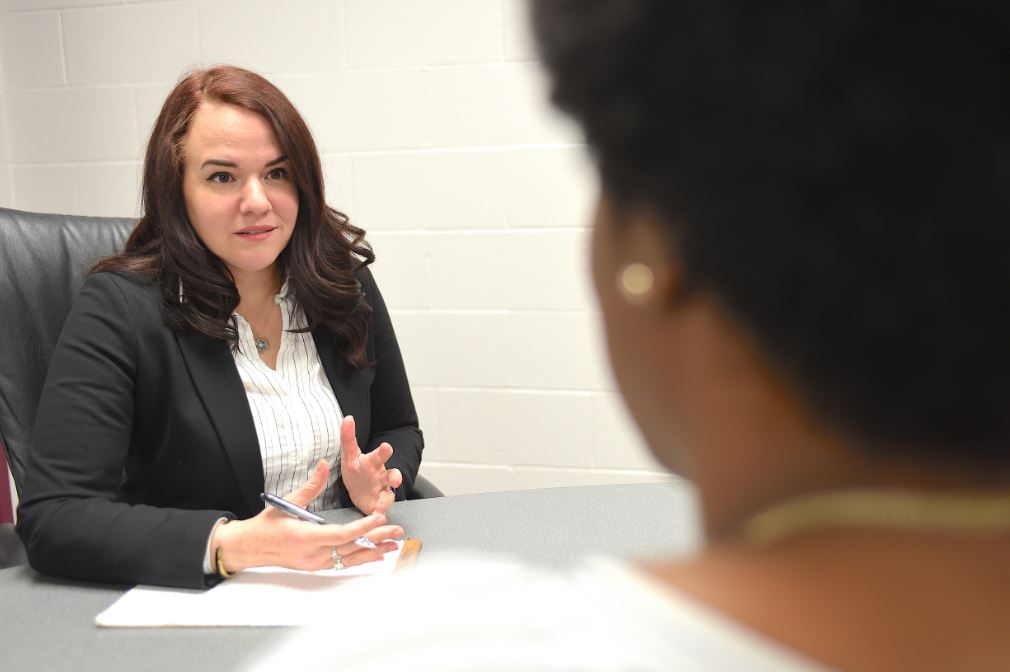 How an analytical mindset paid off: Alumni spotlight on Andrea Blakey 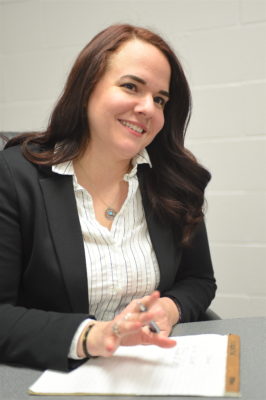 FTCC is celebrating #CommunityCollegeMonth in April by sharing stories from graduates through the years. Andrea Blakey is the second story we’re sharing in this weekly series.

Andrea Blakey never had a career. Instead, she worked to sustain such as being a bartender. She had her reasons. A native of Niagara Falls, New York, Blakey was a military wife and her husband’s career in the U.S. Army kept her family mobile. She’s a mother of three: a 13 and 15 year old daughter and a son currently in his senior year at Niagara University, a private institution.

In 2015, Blakey moved to North Carolina, not far from her parents’ home in Lillington. It was a fresh start as she decided to enroll at Fayetteville Technical Community College and study radiography. One problem arose: biology.

“It kicked my butt,” Blakey said with a slight laugh. Her family’s three dogs barked in the background, nearly drowning out her calls for silence. A mail carrier passing by set the K9s off, unlike the family’s guinea pig. Blakey’s interest in radiography stemmed from her want to help people as medical professionals use the imaging technique to identify a range of problems such as cancer, tumors, dental problems and even injuries in order to aid patients, according to the National Institutes of Health website. Blakey visited the Criminal Justice Department Office in the Horace Sisk Building on FTCC’s Fayetteville campus. That’s where she met Mark Vecellio, who was a full time forensic science instructor. Now, he also teaches as an assistant professor of applied forensic science at Methodist University.

“He suggested I look down the route of latent evidence,” she said. The field involves evidence processing and procedures that include learning to fingerprint, classification, identification and processing crime scenes. What she learned reminded her of what it was like to live her “life.” She juggled bartending and a second job, being a single mother and doing class work. “There’s a thought process of you need to do X, Y, and Z. It’s structured. There’s a basis for how everything should be done, but every case is different so you may need to deviate from that.” 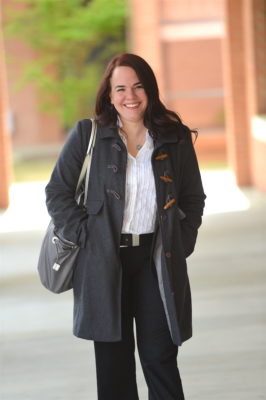 She added, “Part of my job is time management. My mind is very analytical. That’s how my mind works. Once I started my core criminal justice classes, it came very natural to me. I had found my ‘thing.’”

Blakey also began working in the department’s crime lab as a work study student. It provides a “hands-on” experience, offering tools to analyze mock crime scenes; the ability to casts footprints and tire tread; how to take photographs at scenes; drawing sketches and properly filling out crime scene reports. The lab wasn’t the only helpful aide Blakey had as a student.

“All the criminal justice instructors are great, Dr. Pia Duncan, Jeffrey Zack and Deborah Carnes,” she said. “These are all people that truly helped me along the way, and if I didn’t have them in class, they were advisers.”

“She’s become a mentor to me,” Blakey noted.

Blakey graduated with two associate’s degrees – criminal justice latent evidence and general education – in 2018. She also earned her latent evidence and latent evidence-arson investigation certificates at the college. Two days before the May 2018 Commencement Ceremony, she earned a position with Perspecta; she’s retained by the National Background Investigations Bureau. She works as a contracted federal investigator. She conducts background and clearance investigations for potential hires in national security or public trust positions. 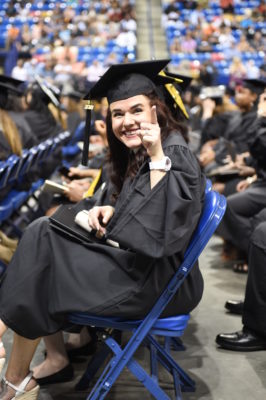 Andrea Blakey at FTCC’s 2018 Commencement Ceremony at the Crown Coliseum.

“I’m pretty sure I was in my car when I got the email, and I screamed,” Blakey said about the job offer. “I do multiple interviews a week and sometimes, I come to FTCC to get educational records for subjects I interview,” she said. “I usually stop by the criminal justice office to say hi when I can.”

In addition, working for Perspecta is more than just a job for Blakey. It marks the first time she knows what her paycheck will say unlike the uncertainty with bartending. She gets holidays off, accrues paid-time off and has health benefits. She graduated debt free from FTCC. It’s also a change for her children.

“They were excited,” she said. “I can be around my kids a little bit more now. I make my own schedule, set up my own appointments. I’m home on the weekends, which I never was before. Literally, for three years, I didn’t have days off or it was far and few between. This job is ideal.”

She’ll take a small break from her job next month. Her son’s graduation from Niagara University is on May 18. It’s a meaningful day for the pair. Their graduations will be exactly – to the day – a year apart. It made her think back to her time at FTCC.

“I loved it, besides I was bad at biology,” she said with a smile and chuckle. “I attribute some of my success as a student to the CJ (criminal justice) instructors. They’re caring, understanding and their belief that every student has it in them to succeed.”

She added, “I love the school. I’m happy to help when I can.”