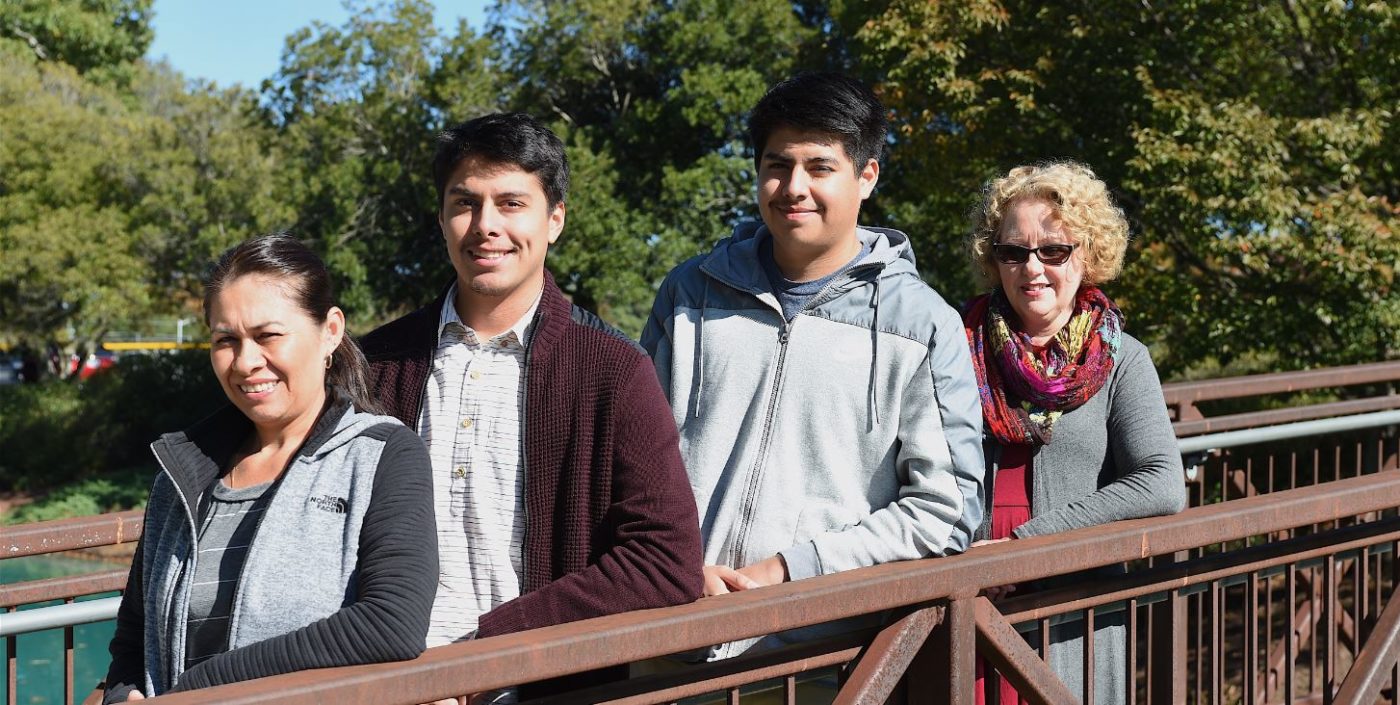 An English as a Second Language instructor helped change a family

Education has always been a part of Brian and Victor Arevalo’s lives, although memories of earlier lesson plans through the years have turned hazy.

“I remember field trips, having stickers and name tags to say who we were,” Brian, 19, recalled.

“I remember nap time and the blue, little beds we would have, but nothing else,” Victor, 18, chimed in. Brian looked at his brother and shook his head in laughter without saying a word.

Brian and Victor were toddlers when they unofficially became some of Fayetteville Technical Community College’s youngest students in 2003. They were part of a federal program called Even Start. The program offered grants to support family literacy projects targeting early childhood education and adult literacy such as lessons for English-language learners, and activities to make the family unit more cohesive.

The program focused on low-income families for their children as young as birth to age seven, according to the U.S. Department of Education’s website.

In Fayetteville, the program involved the college and Cumberland County Schools. The partnership consisted of Wanda Wesley, a family literacy coordinator for the school system, a pre-kindergarten teacher and an assistant in addition to FTCC English Second Language Instructor Lynne Kreiser; she taught the parents.

Kreiser described being involved with Even Start was the “perfect combination” for her. 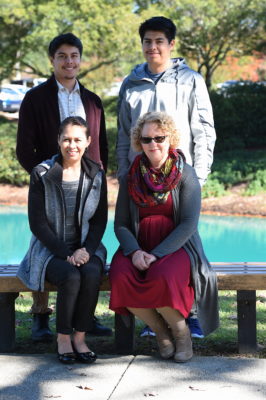 “I have very strong beliefs about how important it is to work with young children, even though I’ve become an adult educator,” Kreiser said. She has taught at the college for 22 years. “I think the family is the most important unit in society, whatever the makeup of the family is. Some families struggle so much and don’t have any support, and they’re left on their own to get by and do the best they can.”

Then, the Arevalo brothers enrolled at FTCC. They graduated from Terry Sanford High School. Kreiser saw the brothers again in October 2017 for the first time since they were students in the Even Start program. All hugged each other and smiled in the lobby of the Health Technologies Center. The brothers’ mother, Elvia Arevalo, was there. She attended the Even Start program with her sons. The Arevalo family and Kreiser reconnected, thanks to Wesley. Earlier that year, she attended FTCC’s Chapter of the National Society of Leadership and Success Member Induction and Awards. She recognized two of the inductee members – Brian and another student who also attended the Even Start Program at a young age.

Brian shyly admitted he didn’t remember Wesley at first, but his mother did.

“I felt like a proud grandmother,” Kreiser said when she saw Brian and Victor again. “When you see them as three and four year olds, all are pretty amazing. Sometimes you don’t get to see the pay off as an educator. This story is kind-of-like, ‘If they hadn’t come to our class, would this have happened?”

Through the years, Brian and Victor have been able to understand the payoff from attending the classes. English became their first language. Their education didn’t stop after graduating from high school. Both also have learned to juggle classwork while working at a local seafood restaurant.

Victor added, “As you grow up, you see how important learning a second language is with applying for jobs and your family, it helps you out more.”

Elvia Arevalo was born in Mexico. She moved to Fayetteville about 20 years ago to stay with family. That’s when she met Abel Arevalo, her husband. Arevalo didn’t speak English when she moved to North Carolina. She initially took an English as a Second Language (ESL) class at a local high school before she learned about Even Start. Participating in the program included adults typing assignments on the computer and reading newspaper articles.

“My sons were about to start preschool, and I thought it would be a good opportunity for me and my sons,” she said about getting involved with Even Start. “Living here, you need to know something. I couldn’t be without English. I needed to know English for my kids to help them with homework, when I needed to talk to their teachers or if they needed to go to the doctor.”

Arevalo described Kreiser as a “good teacher,” one who pushed her to understand English by using a variety of methods such as repeating words until she pronounced them correctly.

“I understood everything she was teaching, it wasn’t too hard and not too easy,” Arevalo said. “This program helped my family out a lot. We could be a lot different if that program didn’t exist.’”

When Arevalo signed up for Even Start, she decided Brian and Victor’s second language would be Spanish. The brothers would learn it at home. Arevalo said still, her English isn’t perfect but her sons help her. She does similar for them when it comes to Spanish.

“Our mom likes it when we correct her so she can learn better,” Brian said. “She wants to be able to communicate better. And our dad tells us to talk more Spanish than English to him.” 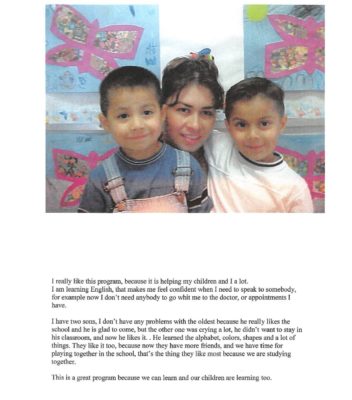 Pictured is Elvia Arevalo, center, and her sons Brian and Victor when they were part of the Even Start Program. The scanned page is from a booklet of the program’s graduates where they shared their thoughts on the program’s benefits [Contributed by Lynne Kreiser]

Being bilingual has been beneficial for the family outside of the home. A new student, from El Salvador, enrolled at Terry Sanford High during Victor’s senior year. The transfer student spoke little English. Victor helped him. Arevalo said “it felt good” to know Victor was able to assist a fellow classmate.

Kreiser said stories like the Arevalo family’s serve as examples about the importance of community partnerships. Even Start hasn’t received funding since 2010, according to the U.S. Department of Education’s website. The story also reinforces why people become educators – for Kreiser, at least.

“These two young men started with us in 2002-2003, and I just think this is an amazing story,” she said. “And now, they’re students here. Having this partnership, having this positive relationship with FTCC – the parents and the children – it has paid off.”

At FTCC, Brian plans to obtain an associate’s degree in science. His next goal is to earn his associate’s degree in dental hygiene. Victor is also pursuing a science degree. He wants to transfer to North Carolina State University and study in the business field. Knowing the brothers will leave home is an idea Arevalo still has yet to come to terms with. They are, after all, her sons.

“My sons are doing [well], they’re still in school and interested in school,” she said. “And I’m proud of them. They’re going to make me cry when they leave FTCC and go to school in a different city.”

*This article originally appeared in our 2017-2018 Annual Report.